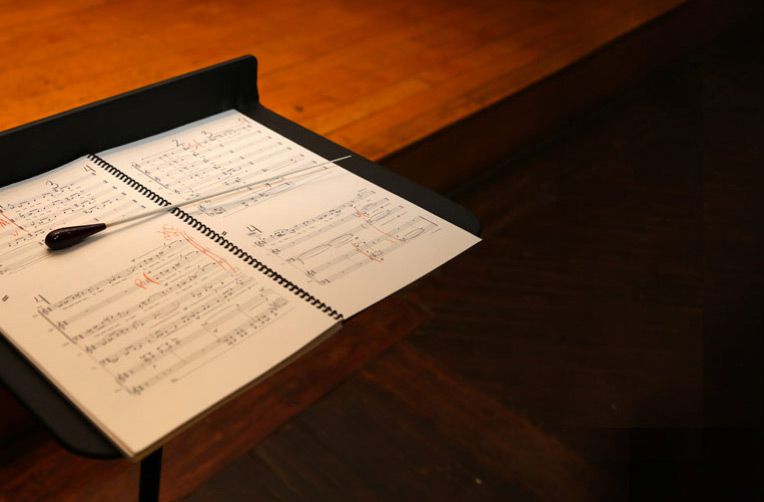 Alta Magazine – Time's Up for exclusivity in classical music - L.A. Philharmonic welcomes the next century's music makers with open arms

“Underneath the Sheen is reflective...simple and majestic, filled with grandeur as well as intimacy.”
– Catherine Womack
April 29, 2019

“Of all the career guidance composer Julia Adolphe has received over the years, it was advice offered by an inmate she met while teaching music theory at Auburn Correctional Facility that has proven to be among the most impactful.”
– Rebecca Sutton
March 12, 2019

Strings Magazine – During Its Centennial Season, the L.A. Phil Has Its Eyes on the Horizon

“The focus on the new or the next is well represented with the premieres of more than 50 new commissions from composers like Philip Glass, Steve Reich, and Julia Adolphe, whose stunning, atmospheric piece Underneath the Sheen figured into the season’s opening gala concert.”
– Megan Westberg
January 22, 2019

“L.A. Phil also recently premiered Julia Adolphe’s wonderful, melodically entrancing piece Underneath the Sheen, which was one of the highlights of the “California Soul” gala at Disney Hall on Sept. 27…”
– Falling James
October 8, 2018

“The young LA-based composer Julia Adolphe is having a moment. Well…let’s call it four years, and counting. Multiple commissions from the New York Philharmonic, from LACO, and from the LA Phil, which premiered her latest score to open its centennial season…”
– Gail Eichenthal
October 5, 2018

I Care If You Listen – 5 Questions to Julia Adolphe

“National Sawdust has announced “A Barrel of Laughs, A Vale of Tears,” a new opera written by Julia Adolphe, as a Project-In-Residence for the 2018-2019 season.  Adolphe is working with librettist Stephanie Fleischmann and adding a few new twists to the beloved children’s story written by Pulitzer Prize winning cartoonist and author, Jules Feiffer, which will create an inspiring experience for both adults and young audience members…  ”
– Jennifer Pyron
July 6, 2018

“We asked 11 composers to tell us about the single most influential woman in their professional lives. Here, in their own words, are touching tributes to teachers, mothers and other composers who have championed and inspired them every step of the way…”
– Merrin Lazyan
March 5, 2018

“Listen to the episode to learn how to set up a website for composers, how a student in the Cornell Prison Education Program left an impact that still affects Julia’s mindset today, and what it’s like to work with the New York Philharmonic…”
– Kelly Kasle
October 3, 2017

“Adolphe, who’s been described as a ‘bona fide phenom,’ is currently finishing her doctorate at USC’s Thornton School of Music. But she’s already had two orchestral works performed by the New York Philharmonic…”
– Jonathan Shifflett
March 17, 2017

“Kristin Kuster, Anna Clyne, Julia Adolphe and Sarah Kirkland Snider are currently working on operas that I am psyched about hearing for the first time….”
-Missy Mazzoli
March 13, 2017

“Meet Julia Adolphe, her Sound Investment commission is about to be premiered by LACO…”
– Brian Lauritzen
March 4, 2017

“American Composers Orchestra: What was it like to receive a world premiere at the New York Philharmonic? What surprised you…”
February 9, 2017

“Adolphe, 28, shows a remarkable gift for sustaining a compelling musical narrative. What’s more, she brings a gratifyingly original approach to the concerto format…What makes Unearth, Release so immediately appealing is the composer’s command of color and gesture to heighten emotional response…”
– Thomas May
November 21, 2016 | Download PDF

The New Yorker – A Composer’s Debut, At the Philharmonic

“Julia Adolphe, twenty-eight years old and completing a doctorate, is starting at the top with her viola concerto. She began not with notes but words: a page of adjectives and images, indicating moods that she wanted to capture…”
– Alex Ross
November 21, 2016 | Download PDF

“Adolphe, who at 28 qualifies as a bona fide phenom, has written a concerto that captures the fragile clarity of twilight…threading the dark, velvety viola through a shadowed orchestral landscape…”
– Justin Davidson
November 18, 2016 | Download PDF

“Adolphe has an expressive voice that combines strong melodic writing with atmospheric orchestration….The concerto in total is only nineteen minutes long, but it is a complex, evocative work, and marks an important success for its 28-year-old composer…”
– Eric C. Simpson
November 18, 2016 | Download PDF

“Adolphe’s viola concerto is a substantial contribution to the repertoire with interesting writing for the soloist and a model of how to orchestrate for string instruments that can be easily lost in a full orchestra.”
– William Thomas Walker
July 16, 2016 | Download PDF

“Adolphe, just 28…is a gifted American composer whose artistry is turning heads around the country…Adolphe’s music had a luminous beauty that warmly enveloped the listener…”
– Janelle Gelfand
May 24, 2016 | Download PDF

“I sat down with composer Julia Adolphe, a rising star on the contemporary classical music scene. We discussed her early years, growing up in Chelsea, as well as her student years with the late Steven Stucky…”
– Mark Travis
March 2, 2016

“Julia Adolphe discusses how to balance her time between composing and working on her composition business.”
– Garrett Hope
February 25, 2016

“If the name Julia Adolphe rings a bell, it may be because the New York Philharmonic’s performance of her “Dark Sand, Sifting Light” was a highlight of the inaugural NY PHIL BIENNIAL last spring…”
February 25, 2015 | Download PDF

“The League of American Orchestras and EarShot, the organizations administering a new program to provide commissions and premieres for scores composed by women, announced the winners of its commissions on Tuesday…”
– Allan Kozinn
September 30, 2014 | Download PDF

The New York Times – A Work is Rushed to a Debut, by Design

Ms. Adolphe “learned that her piece has been selected to receive its premiere on Thursday night at Avery Fisher, in a program conducted by Mr. Gilbert…”
– Michael Cooper
June 4, 2014 | Download PDF

“SoundAdvice sits down with Julia Adolphe, one of the composers selected to participate in the New York Philharmonic EarShot Readings in June, part of the inaugural NY PHIL BIENNIAL…”
May 29, 2014 | Download PDF

“With great clarity, composer and librettist Julia Adolphe encapsulates Sylvia’s dilemma in a plaintive cry: ‘What was it you needed? What did you think a thirteen-year-old girl would know?'”
– Judy Gelman Myers
April 7, 2013 | Download PDF

“‘Sylvia,’ a one-act chamber opera is unique in its venue, its creator and its subject matter…”
– Alan Zeitlin
March 15, 2013 | Download PDF

Out West Arts – Who is Sylvia?

“Ms. Adolphe had set up shop in a La Brea Blvd. art studio over the weekend along with seven instrumentalists, four vocalists, a director and a conductor to produce one of the most ambitious and defiantly audacious pieces of music theater I’ve seen this year…”
April 17, 2012 | Download PDF

“One of the most effective compositions was Julia Adolphe’s ‘I Felt a Cleaving,’ a setting of Emily Dickinson’s concentrated minimalist poetic language…” – Cecelia Porter
January 22, 2012 | Download PDF