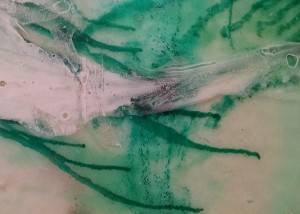 Detail from Green #1 by Jonathan Adolphe

Veil of Leaves overlaps two mirroring processes: the diverging and merging of musical voices. At first, a single melody unwinds, drifting slowly apart as the music twists and turns. In the wake of this unfolding line remains a fading harmony; the string unisons diverge leaving a swirl of pitches. Like the veins of a leaf, the music branches outward, forming a web of interweaving voices. Two and four-part contrapuntal lines arise from the texture as the melody sounds vertically. In the second half, a veil-like counter-motif appears in the string harmonics, a gesture that is at once airy and transparent as well as highly rhythmic and articulate. To mirror the initial movement of a single pitch moving outward, this second melody descends and merges with a rocketing, energetic ascent in the cello. The low strings rise from the depths while the high violins float downwards. They unite near the opening unison pitch, evoking the color and sound world of the work's beginning.