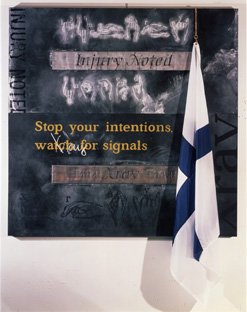 White Flag positions a chromatic, lyrical melody against more percussive sounds in an imaginary battle. The two ideas develop independently and then merge together at the climax. They then fade, entwined, in reconciliation or an act of surrender symbolized by the piece's title. The composition also evokes the imagery of Navy Signal Flags often used in my father's paintings. I was compelled by the flag's fixed symbol over a moving texture. The music strives to evoke that duality.