Excerpt from Underneath the Sheen, recorded
October 12, 2018 at Walt Disney Concert Hall,
courtesy of the LA Philharmonic 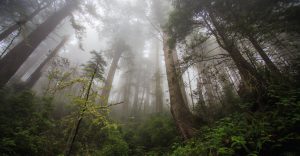 Underneath the Sheen envisions the movement of light edging and shining through a canopy of leaves and branches as observed from the forest floor. The endurance and quiet omnipotence of California’s Redwood trees served as the source of inspiration. Standing beneath these trees is a humbling and exhilarating experience, a stunning reminder of the simultaneous power and fragility of nature. The immense roots, twisting and turning, the mist hanging in the air, and the beams of light entering the forest ceiling create a striking enclosure, encasing the observer in an otherworldly realm. The music explores this oddly foreign yet deeply intimate atmosphere, a sense of a lost home, a state of vulnerability.